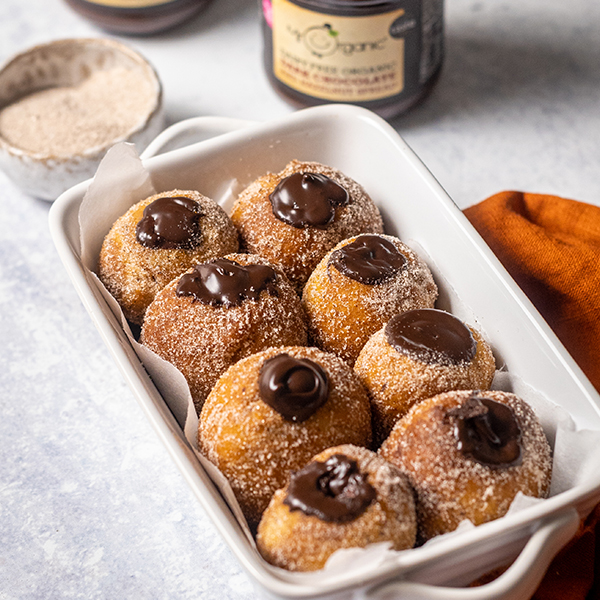 This holiday season treat yourself to these indulgent doughnut bites, filled with our gooey Dark Chocolate and Hazelnut spread. We dare you to only eat 1… we know you’ll be coming back for more!

1. Start by combining the flaxseeds with 4 tbsp water in a small bowl and set aside to soak for 10 minutes.

2. Pour the luke-warm dairy-free milk into a large jug and sprinkle over the yeast and sugar. Stir to combine and cover the jug with a tea towel. Place it into a warm place for about 10 minutes or until the yeast has gone frothy.

3. In the meantime, sieve the flour into a large mixing bowl and combine it with the fine salt. In a separate bowl, combine the melted butter and flaxseed mixture.

4. Create a well in the middle of your flour bowl and add in the butter mix as well as the frothy yeast mixture.

5. Combine with a spatula until the dough is thick enough to be handled by hand. Knead on a lightly floured surface for 2 minutes, then shape into a ball and place it back into a greased bowl, covering with a damp tea towel. Place the bowl in the closed oven and allow for it to rise for 1 hour or until it has doubled in size.

6. When the time elapses, place the sunflower oil into a deep saucepan of small diameter and carefully heat it over low heat. Once it reaches 220C its ready to fry your doughnuts.

7. Whilst the oil is heating, prepare your doughnut bite shapes. Create equal round dough balls from your dough and place them onto a lined tray, leaving at least 2 inches between them. Cover again and let them rest until the oil has reached frying temperature.

8. Carefully lower the doughnut balls into the hot oil with a ladle, one at a time. They should only need between 20-30 seconds to fry, carefully turn them with the ladle during the frying process and remove them once golden. Place them on a kitchen towel to remove any excess oil.

9. Repeat until all dough balls are created.

10. Mix the caster sugar and cinnamon in a small bowl and coat your doughnuts in the sugar/cinnamon mix. 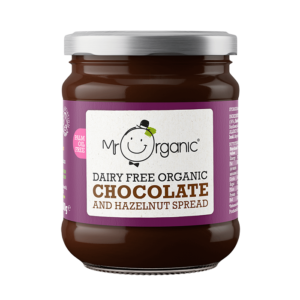 Halloween is just around the corner, so why not make these ghoulish meringues with your leftover aquafaba!

The perfect treat that can be enjoyed when dipped in a glass of plant milk, especially when they are fresh out of the oven!

Shakshouka roughly translates in Arabic to 'all mixed up' so here's our all mixed up, vegan, version of this mouth watering dish!